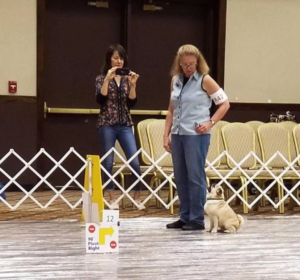 Reflecting on something I saw at the dog show this weekend. Keep in mind I’ve previously trained and shown a dog through utility, trained the “old school way” using choke collars, forced retrieves, and plenty of collar corrections. I now train using positive reinforcement and my dogs perform more consistently and ENJOY working. When you know better you do better.

Watched an obedience exhibitor practicing off leash with her dog. Dog had good heeling position but looked stressed while doing it. Her praise involved patting the dog on both side of his head/cheeks rapidly, which produced lip licking from the dog. She didn’t talk to him or praise him while working. I guess she thought he knew he was doing it right. Commands were given in a stern tone. The dog’s tail never wagged. It fell of the back, tense and motionless.

Then came the command discrimination. As soon as the woman left the dog his head turned away from her. She yelled “watch me” and the dog lowered his head and turned back in her direction. “Drop” she commanded, and the dog slowly crept into a down, then began sniffing the ground. She commanded to watch again, and when the dog failed to pay attention, she walked briskly forward and grabbed the dog by the collar, one hand on each side of the face, and swung the dog’s head forward. She left the dog again, commanded sit, which the dog ignored, head lowered. Back to the dog she went, grabbing the dog’s collar again, and yanked him into a sit.

The dog sat there gazing off in the distance, panting, yawning, and lip licking. He would not look at his owner. The scenario was replayed over several times until the dog refused to do anything for her. Her friends looked on while she talked about his “stubbornness”. She talked about the “bitches in season” and the heat as possible reasons for the dog’s poor performance in training.

I felt a sadness as I watched. I felt sorry for the dog and the owner, as I understood the problem. They lacked a working relationship built on trust and respect. The dog clearly was not having fun and it showed in his body language and repeated stress cues. The owner was frustrated by her dog’s lack of proficiency. She did not understand that her dog was stressed and clearly was afraid of making mistakes. There was a lack of communication that worked for both the dog and owner.

I’ve been there. I trained that way 30 years ago. Dogs were commanded and corrected, period! NEWS FLASH! IT DOES NOT NEED TO BE THAT WAY!

As luck would have it my conformation ring placed me ringside when they competed the next day. The results were about what I anticipated. Heeling that lacked enthusiasm on the part of the dog. Several stops to scratch an imaginary itch during transitions between exercises. Double commands and failure to perform the correct exercises during command discrimination, the dog refusing to look in the owner’s direction. A half jumped; half walked broad jump. No encouragement or attempt to engage the dog in the ring. Only those annoying cheek pats while the owner discussed the dog’s performance with the judge when it was over. I wondered if the dog thought they were a dummied down version of the collar corrections.

Positive reinforcement training fosters a positive relationship. It creates a TEAM! Training with intimidation and corrections is conflict you and your dog don’t need. I’M SPEAKING FROM EXPERIENCE!

I encourage anyone working with a dog for competition to learn to read dog body language and signs of stress. Then video your training sessions and look for your dog’s own stress cues. It may be an eye-opening experience.