It’s All About the Food

During my 30 years as a dog trainer I have yet to meet an owner who refuses to feed their dog. Many owners feed their dog religiously twice daily.  Yet many of these owners are reluctant or unwilling to use food rewards as part of their dog’s training. The concept of not providing their dog’s meal in a bowl is completely foreign and upsetting to many owners. Asking owners to feed their dog from a food dispensing toy, or through “enrichment” or “training,” often produces a “deer in the headlights” look.

One of the common misconceptions is that food must be used in positive reinforcement training. Owners are often reluctant to use food during training for fear they will “always” need to have food with them or their dogs will get “fat.” Old school trainers, those still relying on punishment, fear, and intimidation to train dogs, have been spreading these myths quite successfully for years. Nothing could be farther from the truth!

Food is not only necessary for survival but a powerful motivator for many dogs (and humans.) When we eat a complex reaction is triggered in our bodies. Our body produces certain chemical reactions based on the foods we eat, that can directly impact our behavior. Certain foods, such as chocolate, actually stimulate specific neurotransmitters in the brain, which produces an elevated level of Dopamine, a biochemical that impacts cognition and motivation.

Dopamine is one of the biochemicals linked to addiction. Dopamine levels increase when we do something rewarding or pleasurable. With addiction, the brain receives a boost of dopamine repeatedly from a behavior. Some eating disorders have been shown to be linked to lower levels of dopamine. Consumption of food directly impacts behavior in mice, humans, and yes, dogs. 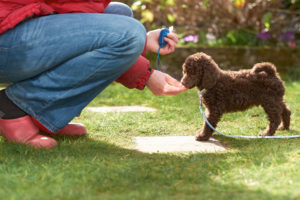 Lead and clicker training for a miniature poodle puppy in the garden.

When we use food as a reward we not only create a specific operant response, we trigger an internal hormonal response linked to the consumption of the food reward. As a dog receives a food reward over and over, his brain becomes hard wired to perform the behavior. These types of behaviors are very difficult to unlearn!

In addition to dopamine, serotonin is another neurotransmitter that is linked to eating and behavior. Higher levels of serotonin are linked to calm behavior. Serotonin regulates the intensity of how our neurons communicate with each other. Consuming foods high in tryptophan directly impacts behavior as this amino acid directly increases the production of serotonin in the brain. Carbohydrates contain the highest levels of tryptophan, yet we are worried about giving our dogs “junk food.”

So, if we are going to feed our dogs anyway, and the consumption of food positively impacts behavior through neuropathways, why are we humans still so hesitant to embrace the use of food rewarding in training?

Here are some ways to overcome your fear of food in training:

Tip #1 – Use food rewards that are soft, smelly, and small – tiny bits of hot dog, turkey, or cheese can be highly motivating and tryptophan rich.

Tip #2 – Use your dog’s meals (or part of them) for training treats – a hungry dog is more motivated to work and using his meals as rewards for good behavior decreases the likelihood he will gain weight because you are “training.”

Tip #3 – Reward, don’t bribe – Since we know that behaviors that are rewarded are repeated due, in part, to dopamine, make sure you are giving the treat after the dog performs the desired behavior.

Tip #4 – Incorporate life rewards – Every dog finds something other than food rewarding. Your job is to learn what motivates your dog and begin using these motivators as rewards. You can also create an association between food rewards and other less valuable rewards such as petting, by pairing the delivery of food rewards with a comfortable scratch behind the ears.

Food rewards, when used correctly, can be a wonderful tool. Positive reinforcement training allows you to set your dog up for success and reward good behavior. This creates a lifelong bond and is both dog friendly and family friendly.